The Calling of Samuel (1 Samuel Chapter 3) 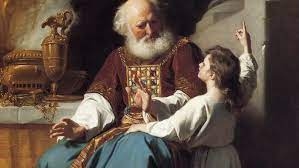 1 Samuel 3 v 2-4 And it came to pass at that time, while Eli was lying down in his place, and when his eyes had begun to grow so dim that he could not see, and before the lamp of God went out in the tabernacle of the LORD where the ark of God was, and while Samuel was lying down, that the LORD called Samuel. And he answered, “Here I am!”

Eli was an old man and so his eyes were growing dim physically and before the lamp of God went out in the tabernacle, i.e. before dawn, the Lord called to Samuel . . . OR . . . (and here’s the clever part) Eli was losing his Spiritual sight, he had lost his focus, was failing to lead the country as he should (his Spiritual sight began to grow dim) but before the lamp of God went out in the country, as the land of Israel lost their first love, their focus, suggestive of the dark spiritual times that Israel was going through (and even more suggestively that this would get worse, it would get darker!), the Lord called to Samuel . . . both interpretations are true . . . both are clever ! I know which one I prefer.

During a recent Life Group session from the Prayer Course (1) the Monday Life group looked at the calling of Samuel (the listening section the course). One thing that was clear both from the talk by Pete Greig and from our discussion in the Life Group was the need to be careful! People say that they have heard from God when they have heard a small voice that, to misquote Scrooge, is more of gravy than of God (an undigested bit of beef or potato) . . . there are those who believe they have heard from God simply because that adds weight to what they already wanted to do or wanted to say . . . but then there are those who have truly heard from God. Usually, this is indeed a still small inner voice, rather than an audible sound however, in Samuel’s case, his response, “Here I am!” suggests that it may very well have been an audible sound. Better yet though, what a fantastic response to the call of God, “Here I am!” (Samuel might have been wrong in the first case, assuming the voice to be Eli, but a fabulous response nevertheless!).

Three times this happens . . . could it be the Father, Son and Spirit perhaps (is it an appearance of the Trinity or is that too much to read into it? – perhaps too much!) . . . three times he is called and each time Samuel responds (wrongly perhaps thinking it is Eli but still responding obediently) – interestingly, a good way of responding to hearing from God, listen, listen, listen!

Eli realises the significance of what is happening and helps Samuel, and this time, an even better response is suggested, “Speak, for your servant is listening.” Samuel is called and Samuel obeys. That is what is asked of us. We are called and God asks us simply to obey Him. We know this don’t we? That doesn’t mean it’s not challenging and difficult, but we know what we are asked to do – simply obey.

Here is the final thought . . . I have had the privilege and honour on a number of occasions to be able to stand up and “preach” about the love of God. If you could summarise everything I have ever said in a church talk into 3 words it would be, “God loves you!” That is a lovely and simple message to bring . . . but sometimes God asks us to deliver a more challenging message, one that is more difficult for people to hear. God tells Samuel what will happen to Eli, whose house (his children) are behaving badly, criminally, sinfully – that God is going to judge and punish them. Samuel, this young boy who most bible scholars assume to be about twelve, has to tell Eli, a wise old leader, that judgement is coming. That message is hard to hear . . . it is also hard to tell. A message that simply seduces the hearer at the expense of what needs to be said is not a good message, Ezekiel 13 v 10, “They lead my people astray, saying ‘Peace,’ when there is no peace.” or Jeremiah 6 v 14, “They dress the wound of my people as though it were not serious, ‘Peace, peace,’ they say, when there is no peace.”  We are called to a message of love, that is true, but love at a cost. We, as proclaimers of the message, should never remember what it cost the author of the message.

Harry Potter says, “Dark and difficult times lie ahead. Soon we must all face the choice between what is right and what is easy.”  I am certain there are probably wiser sounding people to quote from that HP but it is one hundred percent correct . . . God is not calling us to something easy; God is calling us to faith, hope and love, but the most challenging of these is love!

At present the weather seems to have shifted again, from the dry sunshine of a week or so ago back to days of rain. For my allotment it is a welcome relief, as the ground had become so hard I couldn’t get a spade in, however it does dampen the prospect of meeting people outdoors somewhat. The changeableness is slightly unsettling – it throws uncertainty into our plans and reminds us again of our lack of control and there is not much point raging at the clouds. In a similar way we can rage at our circumstances shifting – not just the weather but health, restrictions, and accidents can all work to thwart our plans. However we worship a God who is not bound in the same way – he does not change and his plans stay regardless. As James writes:

Every good and perfect gift is from above, coming down from the Father of the heavenly lights, who does not change like shifting shadows.

In the light of this we can pray in the confidence that he is not buffeted by circumstances and he doesn’t shift beneath us, but is a constant we can rely on:

Thank you that unlike our circumstances you are constant

You see all of our days like an instant

Through our troubles and trials you hold us in your hands

Help us today to trust in you once more

To lean into you as our rock

An place our hope the anchor of your love

Remind us of the certainty of your salvation

Won for all time on the cross

And assured by your resurrection from the dead

Guide us through the troubles of our days

To live as your people

To your praise and glory